Complete list of all 23 restaurants, bars and breweries opening in March 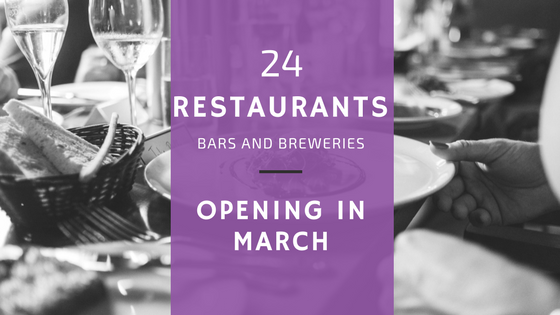 Complete list of all 23 restaurants, bars and breweries opening in March

A complete list of all 24 restaurants, bars and breweries opening in March

Wow, March is a power-packed month for grand openings in Charlotte. Here’s a complete list of all 23 restaurants, bars and breweries opening this month.

New Thai restaurant from a husband-and-wife team that recently relocated to Charlotte from Las Vegas.

Address: Corner of Colony and Sharon, in the same shopping center as Yafo.
Fun fact: Expect patio space with picnic tables and lots of inside seating.
Agenda pro tip: If you’ve never been, the must-try flavors are Salted Oreo and Dunkaroos.
Projected opening: March 9

Chain restaurant and bar with 50 taps coming to Uptown

Cracker Barrel’s trendy new millennial-focused biscuit concept will be opening a location near the new Harris Teeter on South Boulevard.

This popular sushi restaurant is expanding into the heart of Plaza Midwood (the original location is in SouthPark).

The sushi bar and Japanese steakhouse will be at the Embassy Suites in Uptown.

The popular breakfast restaurant chain is expanding into Uptown.

Appalachian-inspired, farm-to-table restaurant on the ground floor of the Ascent in Uptown.

Uptown’s first coffee shop with an on-site roasting facility will open soon on the ground floor of Skyhouse’s north tower in Uptown.

Address: 644 N. Church Street
Projected opening: March
Fun fact: Paul Waggoner, a full-time musician and founding member of Between the Buried and Me will lead the coffee program. Jeff McElwee, the creator of FuD at Salud, will run the kitchen.
Read more: A new coffee shop with in-house roaster is coming to Skyhouse in Uptown

The California poke bowl giant is coming to Midtown.

Comida is moving into littleSpoon after a stint in Plaza Midwood.

Fast-casual concept, but with a level of cooking that’s something you’d find at a white-tablecloth restaurant

The Duckworth’s at Park Road is currently undergoing a significant renovation and rebrand. It’ll reopen with a smaller menu and updated design.

Neighborhood pub with a second-story rooftop bar near BB&T Ballpark.

Gastropub addition to Wooden Robot from the guys behind the Twisted Eats food truck.

People are already going nuts about this burger chain.

Knoxville-based fast-casual Indian restaurant will take over the old TrySports space in SouthPark.

I hope you’re hungry. March is going to be a huge month for the food scene in Charlotte.